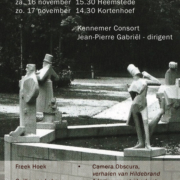 The Camera Obscura was the most popular book of the 19th century. Hildebrand, pseudonym for Nicolaas Beets, described in his book the life of a number of Haarlem figures and families.
A number of stories inspired composer Freek Hoek to write a music piece for string orchestra and triangle, that Sunday afternoon 17 November will sound in the Antonius Church of Kortenhoef.

Composer Freek Hoek, who is part of the orchestra, has several compositions to his name.
The Kennemer Consort is a string orchestra with experienced amateurs that is conducted by Jean-Pierre Gabriel.

Besides Camera Obscura, the Adagio of Guillaume Lekeu and the Serenade for Stringorchestra of Joseph Suk are on the stand.

The Adagio for Strings wrote Lekeu shortly after the death of César Franck. The close relationship between pupil and his musical father is every second noticeable in this tender and lingering melody.

Josef Suk learned at a young age from his father, village organist and choir leader, playing various instruments. At the conservatory In Prague, Dvorak was his composition teacher with whom he was a child at his home.
Suk composed the strings Serenade in 1892 in a very Romantic style.

The concert starts at 14.30 hrs. The admission is free, a voluntary contribution is appreciated. Afterwards there is the opportunity in ‘het Achterom’ to have a drink together with the members of the orchestra.